Today was the first day of the actual build and I have been very pleased with what I have achieved, especially as I thought my entire day was going to be rained off.

I started the day out with a trip to the lumber yard.

I had already mapped out what I wanted in the way of wood, however, due to the unusual 100” width of the trailer, I was hoping that the 8 foot 2×4’s were going to come in above length at 97”.

I have decided to use pressure treated plywood for the rim joists (the outside edges) as they are the most likely to get exposed to water. All the joists and blocking (bits in the middle) are standard SPF 2×4’s. 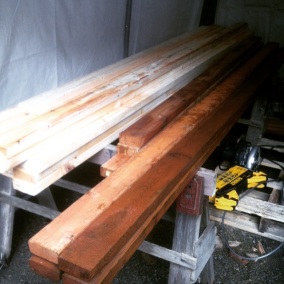 After getting the wood home, it was time to do what the English do best, have a cup of tea and stare at the job ahead.

It wasn’t long before the tape measure was out and the saw was purring. Using what I had learned from the library, and from shadowing a construction friend on a small job, I started framing the rim joists and marking out the placement of joists. Having a trailer built specifically for a tiny home was making my life a lot easier, as it had squared wheel wells and the cross-members that were spaced at 16” on centre.

I realised at one point, that I had nailed in the rim joists that sit along the inside edge of the wheel wells before attaching the joists that run across between them. This meant that I was not able to easily ‘end nail’ the joists into these rim joists.

To get around this I simply propped one side of the framing up, making sure to raise it all the way along, to reduce the possibility of warping. I was then able to introduce the joists.

As I was working alone, I used a nifty little technique, taken from the book “House Framing” by John D. Wagner, to hold one end of the joist up to the rim joist across from me.

I hammered in the smaller nail, bent it over, applied construction adhesive to the end of the 2×4 and reached it across to place it between the markings I’d made on the rim joist.

Then I applied the adhesive to my side, lined it up and nailed it in. I then returned to the opposite side to make sure it was aligned with the markings. I then repeated this process for all five joists.

After I was done, I lowered the one side and lifted up the other to hammer home the nails.

Building in the Rain

We don’t have the luxury of dry weather here in the rain forest, so despite it being dry when I started, the rain isn’t going to be too much of a factor in stopping me build.

I know we’re advised to keep our wood dry, but thats’ something that just isn’t going to happen out here. The wood comes wet from the lumber yard, so there’s no chance!

I decided to call it a day before commencing with the blocking as the rain started to get pretty heavy and it was 4pm.

So at a relaxed pace, on my own, in the rain, with almost zero framing experience; I was pretty happy that I’d managed to go buy lumber, have an hour and a half lunch break, two tea breaks and reach this point in the project in under 7.5 hours.

(The worst part of the day was writing this post, as Tofino’s internet speeds are painfully slow today)

The forecast is calling for an afternoon of sunshine tomorrow, so I plan on finishing off the blocking and possibly start cutting up some EPS (rigid foam) insulation whilst I wait for the marine grade ply to arrive.

Getting day one in the bag feels great, I hope I have as much fun on the rest of the build.

New Completion Date?March 17, 2017
This date has changed many time - March 17th will be the year marker!