It’s been a few days since I wrote anything and now all the days seem to be blurring into one, but I’ll do my best to separate them out for you.

I have been putting in a lot of tiring hours as the weather is perfect for building and have therefore been too tired to write anything down after my days of hammering.

It took me two days to complete the long second wall. Aside from the fact that it’s a big wall, I had some re-design considerations.

Despite measuring things out in SketchUp previously, once you have the physical stuff laid out in front of you, it gives you a more realistic look at everything and it looked like things were just gonna be too cramped in by the main entrance door.

I had hit a road block in the build.

Rather than rush ahead, I decided to take it slow and really think about things and triple measure and calculate.

Long story short, we decided to move the door.

Over lunch I moved some digital lumber around and the new door placement looked like it might work. I was torn, as I had already marked out the stud placements on the sole and top plates, so moving the door meant a wasted morning, but, it actually felt better to finally make the decision to move the door.

After I had finished with the re-design, I needed to flip the wood over and re-draw the stud pattern.

As with the first wall, I needed to nail down the sole plate in a straight line, making sure that the wood isn’t bowed. This isn’t easy with the wheel wells getting in the way and with the fact that the sole plate is not one continuous piece of wood. Using a chalk line helps, but doesn’t solve all the problems.

Certain spans need different thickness of headers (google ‘header span tables’), so I chose to do a 2×6 for the headers over the wheel wells as they’ll be stronger than 2×4’s.

Building around the wheel wells required a lot of measuring and double checking, there’s no way I could afford to get this wrong. As I am using ‘Ardox’ nails, (nails with a twist) they are super hard to remove, so getting things wrong really slows you down. It has been recommended to fasten things together with screws, which is certainly a viable option, but the ‘sheer’ strength of nails is way better, so I’m defying some advice.

As the top plate is not one continuous piece of wood, there’s a split in it. This means there is no stability in the wall and so you have to put a second top plate on top. The seam on this second top plate has to be at least 4 feet away from the seam of the first top plate. So – I nailed a 10 foot piece of wood across the seam for now and will then add the additional lengths at each end as we progress.

It has recently been recommended to me to remove the second top plate and just use the loft rim joists as the second top plate. I am yet undecided, it will gain me some hight in the loft, save me some weight but will lose me height in the main room. And possibly reduce the structural strength? I have some measuring and thinking to do…

My advice here is to build the wall about half an inch away from the wall you’ve just installed. This will give you the room to knock your wall left or right should you need to square it up. Doing this does however mean that all your measurements need to reflect that the wall is shifted 1/2″. So for example, the wall will overhang the other end by 1/2″.

If you’ve ever watched the tumbleweed construction video they show you how to cut out the plywood around the wheel wells, I was going to use this method, however I quickly realised that this method only works if you are inside on a flat surface.

I had a lot of measuring and checking to do to make sure the plywood fitted just right and would overlap the trailer frame by just the right amount. The chalk line came in handy here.

Thankfully my neighbours / landlords are awesome and they were ready and willing to help lift the wall into place. We had the wall up, levelled and attached in the matter of seconds.

I’ve not seen this done before, but I just felt that I needed to protect the wood that sits on top of the metal wheel wells. I decided to add ‘Blue Skin’, however my local store is no longer selling blue skin and so I used an alternative. It’s basically what you use to seal up around the windows. 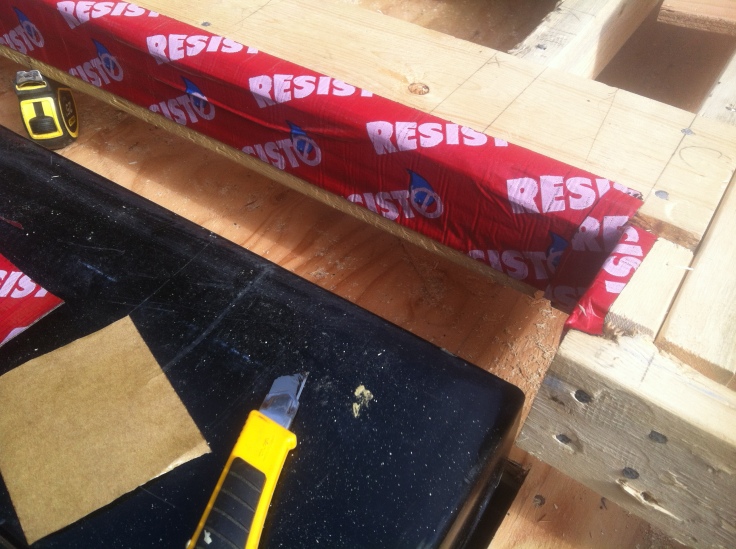 It was a last minute decision that I thought might protect the wood should any condensation occur between the wheel wells and the header. It seems that the wheel wells is the weak point in the trailer when it comes to insulation and air tightness.

As the build progresses I will be figuring out more ways to improve this area.

The third wall was pretty much the exact same process as the second.

I decided to add some support under the trailer instead of just relying on the scissor jacks.

There was an old set of deck stairs on the property that no one wanted. They had pier blocks at the bottom and some good chunks of 4×4 posts. I used these to make the supports. Double checking that the trailer was level before installing each wall. 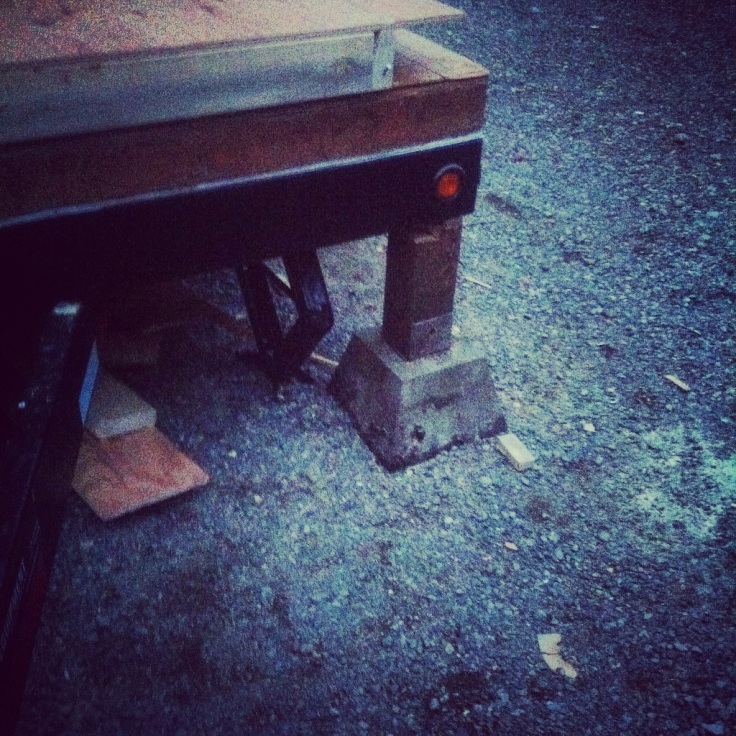 The hammering was taking it’s toll and I needed to take a break on the morning of Day 11 and ice up my hand as it was swelling. This slowed the process down a little, but it appeared that I was doing pretty well for time, so I thought it more valuable to take a little break, rather than mess up my wrist. 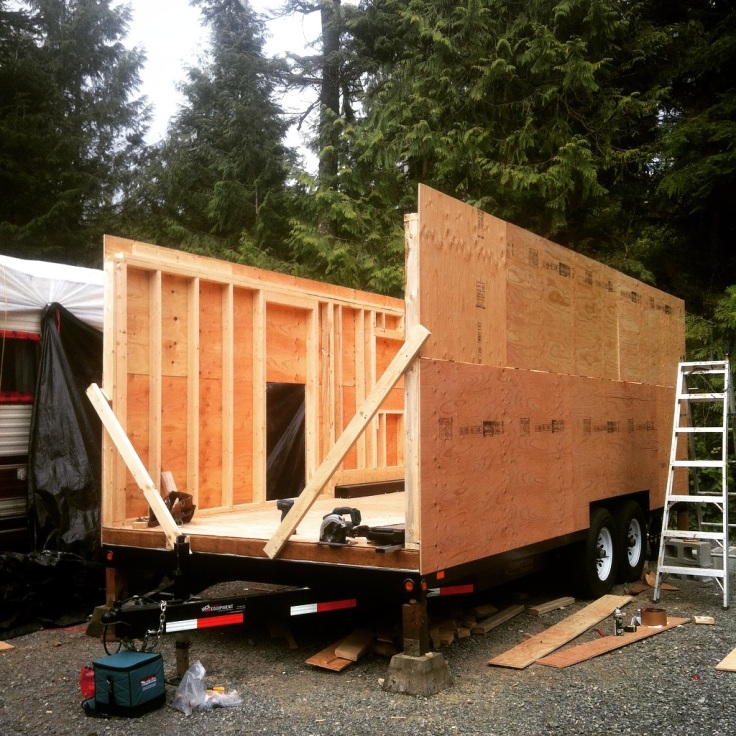 So now it’s time to take a rest day and finally write this blog post.

I’m ordering the windows and skylights on Monday and researching how to build my own door and how to install a ridge beam and rafters. Until next time…