Day 12 was more like a half day, it was a rainy day, but I did manage to squeeze in the last wall between showers. In fact, it only took me a couple of hours to erect the last wall. After the mammoth challenges of the two long walls, this little guy was a breeze and was possibly the best constructed wall yet!

Due to it being the last wall, it’s not possible to attach the plywood before standing it up (unless you are building it on a flat surface other than the trailer itself).

For this reason it was the easiest wall to lift, meaning I could do it completely unaided.

Once the wall was up and everything was levelled I screwed and later nailed the last piece of the puzzle in place.

I applyed one piece of ply, but left the top open for now, as it’s easy to pass wood through to the indside.

Further to a previous comment I have since decided to add the second top plate, it’s just the right thing to do!

So, I completed this task, making sure all the top plates were completed.

(Full Disclosure: I’ve borrowed a nail gun and things are moving three times as fast now!! Plus my wrist is getting a little break. And the neighbours are being saved from all that banging!)

I then realised that I needed to straighten the side walls, as they were bowing out in the centre, and as expected they need to be pulled in.

As if by magic, my excellent framer friend dropped by to see how things were going, just at the right time to help.

Straightening the walls is actually very easy. I wish I’d taken a picture for you, but I was working so fast, I didn’t even think about it!

I will do my best to explain it in words: (Skip this if you don’t care how to straighten a wall)

Repeat this for the other side.

You might find that the wall needs pushing out at some point along it’s line. This is easy to fix.

Now with the walls straight I could start the loft.

I’ve decided to use 4×4 Cedar beams for my loft, the look amazing and smell wonderful.

Due to the odd size of the trailer, I needed beams that were one inch linger than 8 foot (97”). The best thing here is that the cedar is a rough cut, so it actually comes in over 8 feet long. Each piece I measured was at least 98” and some were just over 100”.

It was a $220 CDN purchase, but it’s going to be such a beautiful feature of our living space. They already looks awesome. 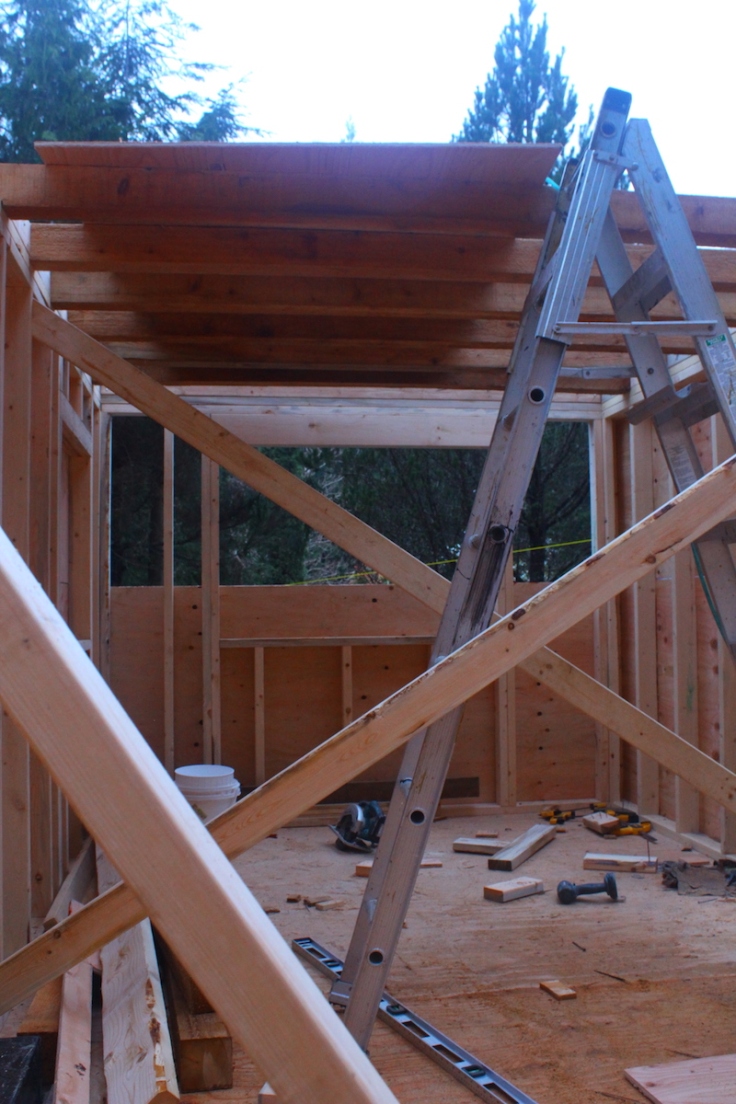 So, due to the 3.5” rim joist, I had to notch out the beams at the ends so they were able to sit flush with the top of them and therefore, later accept the floor panelling for the bedroom loft.

Once the beams were placed (nailed from the outside through the ply), I needed to fill in the gaps between them. This is mainly for a nailing surface for the interior panelling.

The tumbleweed construction video, tells you to fill the 1/2” gap, another construction fellow, tells me not to bother and to just line the internal 2×4 up flush with the inside and toe nail it.

I went for a compromise and cut some small sections of 1/2” ply to playe between the 2×4’s at the places where I was going to nail them.

This keeps the 2×4 a little more stable and also keeps the weight and cost down by only using some scrap ply that’s laying around.

After I had finished the blocking around the loft area, I sealed it all up by placing a 2×4 over top of it all around the edges. This 2×4 will be the rafter base plate.

Now, it’s time to frame in the second smaller loft. I have 4 days of Sunshine, so let’s see how far into the roof I can get.