I’ve been so pre-occupied with the house and work that I have had no time to write in these pages. So much has happened in the last little while, but I will keep it specifically about the siding for now.

The cedar shingles have been so far my least favourite task.  They were very time consuming, made much more difficult by the fact that I had to lay them over rain screen.

Luckily my friend had some rain-screen that is meant for use with shingles left over from his ‘real house’ build. There was the perfect amount for me to complete all the upper half of the house. So thanks for that Adam.

After building out the corners and windows with the treated ply rain-screen strips, I cut out the yellow mesh rain-screen and stapled it onto the building paper.

This creates the small air gap needed out here on the west coast. Living in a rainforest is definitely deserving of rain-screen.

The standard metal bug-screen strips that I used for the bevelled siding don’t work for this rain-screen, so I improvised and used gardeners mesh folded over at the top and bottom of the rain-screen to keep bugs from nesting in the mesh.

I used a level and a piece of wood to mark out the first course of shingles. Basically, you attach the wood in a straight line to rest the bottom of the shingles on. You then put a second layer directly over the top of the first in the same line (obviously staggering the seams) before moving up 5 inches and starting the next row up.

As I was doing the gable ends and the dormers, I was working with angles and different lengths each time, so the pole needed to be shortened as I moved up. I didn’t use the pole for the dormers as the lengths were just too short to go to all that extra effort. I simply used a level as I laid out and attached the shingles, one by one.

The most awkward part was the dormer sides where they meet the roof at a 45 degree angle. I can’t imagine how many times I went up and down the ladders. Most likely two times for each shingle. That’s a lot of ladder trips.

You have to consider the thickness of the shingles as it meets the roof line so that they don’t get too thick and start to bulge outwards as you go up, so you need to cut the thick bottoms off as you work up. It was not an enjoyable process.

I was encouraged to add some kind of design feature into the main front gable end and so opted for the simplest design of creating a diamond pattern in the shingles. It’s not all that difficult once you get going.

Here’s a link to finehomebuilding.com where you can follow the instructions for creating the above pattern.

I opted to create ‘woven corners’ on the dormer, meaning that I wouldn’t have chunky corner post to but the siding against. This however meant a tricky, but rewarding procedure, of marking up and planing down the edges of the shingles where they meet at the corner.

There’s are some videos on youtube showing you how to do it.

I used hot-dipped galvanized fasteners, which are nailed in to the shingle 1 1/2″ above the bottom edge of where the next overlaying shingle will be placed, therefore about 6 1/2″ from the bottom of that shingle. One nail in each side.

As I moved up, I noticed that I needed to use slightly longer fasteners, so they would bite into the plywood.

For the very top row of shingles, I used finishing nails so they were less visible on the exposed sections.

I left a small gap at the top of the shingle line for air to escape, but then covered that up with cedar strips to make it look neat. 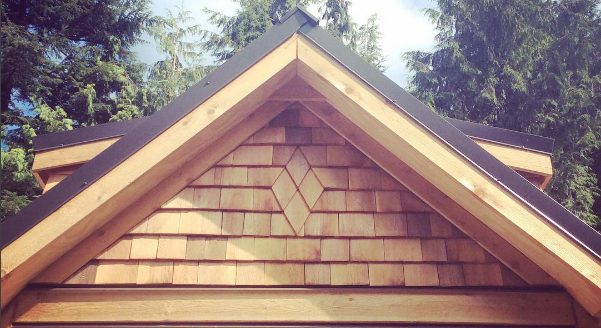 A lot of people stain their siding before putting it up, so that it gets a full coating of stain. As this was the first time doing shingles, I new I would make lots of mistakes and by staining the shingles first, I would’ve wasted a lot of stain. Lots of shingles break, or a lot of waste is created when cutting for the angles.

After taking the advice of a professional painter friend, I decided to use the translucent  ‘Arborcoat‘ water-based stain. As I type this, I have done one full coat and am half way through the second. It looks awesome and I’m happy I decided to protect the wood; hoping to maintain that rich colour of the cedar.

I was so happy to finish the exterior and move inside.

More to come on the following steps:  (when I get chance to type it up)

Building a door
Installing the electrical boxes &
Insulating the ceiling