Building a Front Door for a Tiny House

Due to the custom size of our front door, there was no chance of me finding something off the shelf. The door was going to have to be custom made.

With no idea how to even hang a door, never mine build one, my first port of call was to visit my friends tiny house to check out his door. So much can be learned by simply studying things that are already in existence.

My friend had used plywood sandwiched between cedar, so I decided to use a similar technique.

I used 3/4″ plywood as it was the only size I had left over that would fit the door opening.

I only had access to rough cut cedar too, so it was 1″ thick. That would take my door to 1 3/4″ thick with cedar only on one side. The standard door thickness for door handle spindles is 1 3/8″. This will mean that any interior covering will have to be cut around the interior door handle.

In order to save space on the interior, I wanted an outward swing door. The pin on a hinge sits on the same side in which the door opens, so I needed to source hinges with a non-removable pin (NRP). This means that the door can not be removed from the outside.

I couldn’t buy the hinges until I knew how the door would turn out, as I needed to measure the depth of the hinge. This is effected by the thickness of the door.  I ended up with a 4″x4.5″ set of 3 hinges. the first 4 in that relates to the entire width of the hinge when fully open. The 4.5, or the second number, relates to the height of the hinge. I also wanted to weigh the door before I bought the hinges to make sure the hinges would hold the weight. It turns out that the door was way lighter then I thought (50lbs) and so any type of hinge would have held it’s weight no problem.

I used a few lengths of 1×6 cedar, some ripped down to 3″ width for the edges and the full 6″ for the top middle and bottom. 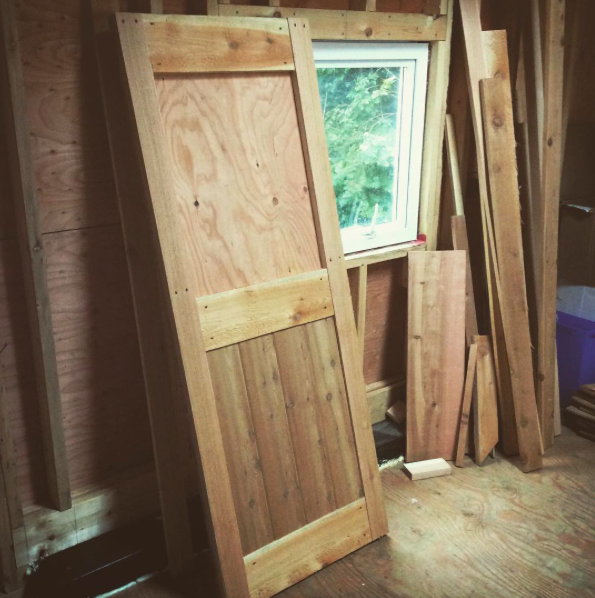 I used a couple lengths of cedar tongue and groove to fill in the rest.

After carefully measuring and cutting the plywood using a framing square, I cut the plywood lengths to frame the design of the door.

I measured out the centre and ‘dry fitted’ the planks to make sure it all fitted nicely together.  I then removed the planks and applied glue to the edges and centre of plywood and carefully laid out the planks again. I then screwed down the cedar using decking screws.

I laid out the TnG, positioning them in a way that aligned the middle join right in the centre of the door and then marked the side pieces for cutting down to size. I then tested the fit with no glue first, and then went ahead and glued them in one by one. 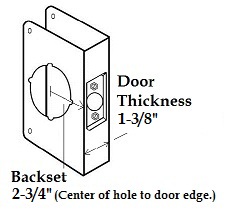 Fitting the door handle was pretty easy too, as the instructions came with the handle. You just have to measure out the ‘backset’ which is the distance to the centre of the bore hole. The standard length is either 2 3/4″ or 2 3/8″. My handle was adjustable, so I set it to the longest, giving me a little more room for trimming out the door jamb. Once the main hole is cut, then you need to bore out the ‘cross bore’, which is the part that receives the latch.

When installing the latch, make sure it faces the right way so that it catches the latch when the door closes.

Installing the hinges was easy, I found some guidelines for the recommended distance from the top and bottom that the hinges should be and used that to place my hinges. I simply drew around the hinge and then used a hammer and chisel to gouge out the 2mm depth of the hinge. 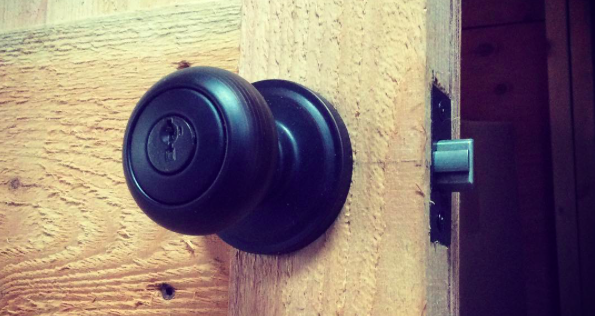 Hanging the door needed the help of another person due to the out-swing being 2′ off the ground. I made a stand that the door could rest on whilst in the open position so as to take the weight, whilst my helper would hold the door upright and I would position the hinges in place and screw them in.

I used a shims under the inside corner and between the door and the stand I had made, to adjust the height a little. The second attempt was perfect and the door was in. The only thing left to do was drill out a hole for the latch plate on the jamb and attach it. 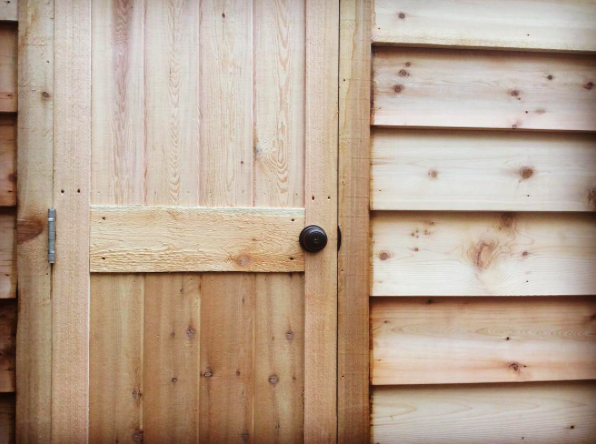 After the rains came, the door swelled a little, so I needed to shave a little bit off the bottom and side. I also added some waterproof membrane to the bottom of the door and then nailed in a little piece of left over flashing. I also sealed the door up with caulking and stain.

I also trimmed out the door jamb with pieces of cedar on the sides and top, and another piece of fir on the bottom for the door stop. I then stuck a door seal around this for the door to butt up against to make a nice tight air seal.